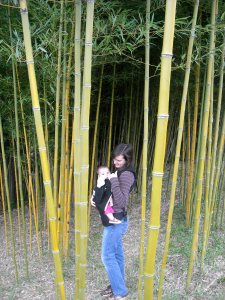 I used my Ergo

all the time with my daughter, Marcella. She’s 3.5 now and prefers to run around instead of being worn now, but I still remember our babywearing days with fondness. Now I have a new babe to wear, and I am thoroughly enjoying it! The first time I strapped my old Ergo on to wear Jude in it, I was awash with happy memories. It felt like an old friend. I now have a new and improved Ergo (which you’ll read about later this week), but my old Ergo will always hold a special place in my heart.

Ergo was the second carrier I ever heard of, the first being the Baby Bjorn. One of the common problems with the Bjorn is that it just isn’t comfortable for a lot of moms (as well as not being ideal in terms of the way it positions baby). My cousin was having trouble finding a carrier that was comfortable for her and my aunt found the Ergo and purchased it for her. 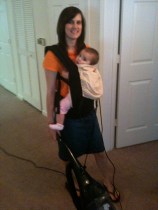 She fell in love. I remember the first time I saw her using it to soothe her babe at a family gathering. I wasn’t even pregnant (nor trying to be) at the time so I simply stored it in the back of my mind. When I got pregnant, my mom told me that she wanted to purchase me one, just like her sister had done for her daughter. I like to say my mom bought me my stroller because she bought me my Ergo and a ring sling

. Those were my “stroller” and I never actually purchased one of the traditional strollers most people buy. I never needed one.

My Ergo went everywhere with me as soon as my daughter was big enough to fit into it (around 6 months or so.) We didn’t own the infant insert

so we waited until she was the appropriate weight and size for it. It was SO wonderful. I literally went into a panic if somehow I had forgotten my Ergo. It was our trusty companion always. I even wore the little baby I watched in it and now wear Jude in an Ergo with the infant insert. My best friend and my mom even wore Marcella in the Ergo. I just bought my best friend, who is pregnant with her first child, her very own Ergo to enjoy.

If you’re not familiar with this very popular soft-structured carrier, I’ll point out some of it’s features. It’s ergonomically designed for the proper positioning for baby and it distributes the weight between the wearer’s hips and shoulders. That means it doesn’t hurt your back, no matter how heavy your child is. I was just talking to a friend who still wears her 3.5 year old son on her back in the Ergo. If you have the infant insert (which I’ll be explaining more in depth later this week), you can start wearing your little one at 7 lbs. If you don’t, around 12 lbs or so is when is recommended and when we started using ours with Marcella. You can wear them on your front, hip or back. I actually didn’t even realize I could have worn Marcella on my hip until after our babywearing days were pretty much over. I’m excited to try it once Jude is bigger. For now, I only wear Jude on the front since he is too small for the back carry at this point. (The infant insert is only intended for use in the front carry position.) The buckles are easy to clip and unclip and come with a safety strap that you pull over the buckle. It can be a little annoying to have to pull over but I actually did have a buckle come undone once and didn’t even realize it at first because the strap caught it. My guess is I didn’t quite clip it in all the way. I was so glad the strap caught it and did its job perfectly!

The sleeping hood is nice and I use it mostly for a sleeping baby or if it is raining. I also use it for privacy while nursing in the carrier. The hood has snaps on it that snap onto the carrier to cover the baby’s head. I also liked using it in the sun for the baby I watched as she was fair complected, and I wanted to make sure she didn’t get too much sun exposure and burn. I will say mine never seemed to want to stay in the pocket which was a bit annoying but really not that big a deal. I just stopped trying to keep it in there after awhile and accepted it would just hang down in front. I used to put my bank card and keys in it instead. 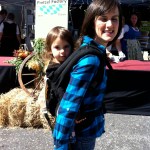 Nursing in the Ergo is definitely possible and I have done it while walking around shopping. The thing I don’t like is your sides are still pretty exposed so if you would rather they not be, that’s a disadvantage. I usually just make sure I am wearing something I can pull down the top or have a nursing tank underneath a regular shirt so my sides aren’t exposed. You can adjust the straps to bring your child down lower to nurse but I you may not have to. It just depends. I haven’t tried nursing with the insert in yet.I imagine you would definitely need to adjust the straps as your baby is up higher. 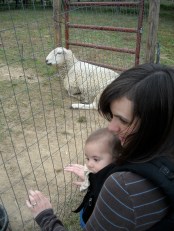 Yes, I love my Ergo

, if you couldn’t tell. I’ll be sharing more about Ergo products this week as well as giving you a chance to win one of your own!!! I’m very excited about that! You can subscribe by email (upper right sidebar) to make sure you don’t miss any of my Ergo posts or any of the posts in the Babywearing series running through the fall and winter months. Because, if you love Ergo as much as I do, you’ll want to read about other Ergo products I’ll be featuring and giving away later in the series as well!

Disclosure: I received no compensation for this post. My Ergo was purchased for me as a baby shower gift by my mother. All opinions are 100% my own. I only review products that I either have purchased myself and love or products I have been given a chance to review by the company that I believe are products my readers would benefit from. Amazon links are affiliate links.

Linked up at The Tuesday Baby Link-Up

29 Responses to "My Ergo Love Affair"