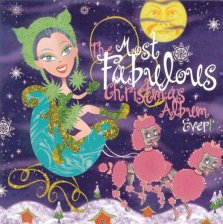 As far as Christmas music goes, I prefer traditional. The old stuff is the good stuff as far as I’m concerned. My favorite carols are “O Holy Night“, “Carol of the Bells” and “O Come Emmanuel”. However, if I’m in the mood for something Christmasy and a little more fun, I pull out “The Most Fabulous Christmas Album Ever”.

It meets my criteria of being old but it isn’t your typical Christmas music either. It’s basically a 40’s big band Christmas album. There are traditional favorites like “Winter Wonderland” and “White Christmas” and then some not so traditional songs like “Santa Claus Came in the Spring” and “Parade of the Wooden Soldiers“.

Even the “traditional” songs on the album have some changes to the lyrics in some cases, which makes it fun to listen to as well.

If you have a favorite Christmas album to share, let’s hear from you!

3 Responses to "Product Review: The Most Fabulous Christmas Album Ever"