Back in my highschool and college days I worked at Henry’s Smokehouse. And it pretty much ruined me for barbecue anywhere else. Yep, it’s that good. I don’t even bother ordering barbecue from anywhere else because I am ALWAYS met with disappointment if I do. 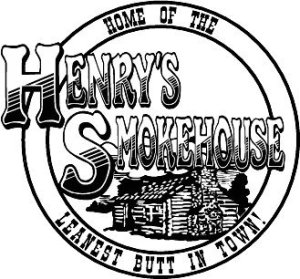 What makes Henry’s barbecue so special? Well, for starters they cook in open barbecue pits with hickory logs to lock in that fantastic hickory flavor. (Drive by and you’ll see the smoke coming out of the building for yourself.) They cook the pork butts for 12 hours in low temperature and their fall-off-the-bone ribs for over 8 hours. But the special treatment doesn’t stop there; once the pork is cooked, the meat is hand-pulled so only the best meat is chosen.

Now let’s talk about their sauces. I’m personally not a fan of tomato- or ketchup-based sauces and I like some spice. Enter Henry’s Spicy sauce. It’s a mustard-based sauce with a little kick and it’s delicious. I’m told by others that the Mild, tomato-based sauce is good but I haven’t actually tried it.

Besides their signature pulled pork barbecue, they also have smoked chicken, ribs, hash and rice and Brunswick stew. I’m a fan of all of these items. When I worked there the only sides offered were baked beans, slaw, fries and rice. (The fries are phenomenal and I used to eat these quite a bit with the special sauce one of my co-workers made sprinkled with Henry’s special garlic salt or dipped in the malt vinegar.) They have since added green beans, potato salad, sweet potato casserole, banana pudding and mac and cheese.

The first item at Henry’s I ever tasted was actually the hash. Being from Southern California originally, I had never even heard of hash but I’ve always said I would try anything once. I’m glad I did. It’s delicious, spicy, meaty yumminess. I have since forgotten what all is in it but I do know it is good.

The Brunswick stew is my go-to on a cold, winter day. The smoked chicken is great chopped with some spicy sauce and slaw. The ribs are extremely tender and seriously come right off the bone. The baked beans are sweet and delicious. And the lemon cake is moist and, well, lemony. But the best, of course, is the incredibly delicious pork barbecue. Seriously. Go get some. And try it with slaw on it even if you think that sounds gross…because it’s not.

One Response to "Henry’s Smokehouse"