This post is part of a series of posts in honor of National Pregnancy and Infant Loss Remembrance Day. Today’s post comes from Adrienne. You can learn more about Adrienne at the end of this post. Before last year, I never knew there was such thing as Pregnancy and Infant Loss Remembrance Day. It seems they have a day for everything these days, doesn’t it? I believe this day is important for people to be aware of because often in our culture pregnancy loss is viewed two ways: either as a hushed, private experience, or as something that seems to happen to everyone.

Pregnancy loss is not something people like to talk about for many reasons. For some, it is too difficult to talk about. Some people just don’t know what to say to a mother who has lost a baby. Many people don’t even announce that they are pregnant too soon for fear of losing their baby. Some people don’t view the loss as the loss of an actual baby, which is another issue altogether.

Pregnancy and Infant Loss Remembrance Day is special to me for two reasons. First, I have lost a baby. Second, I lost my baby on this day. This October 15 will mark the second anniversary of the day my baby was taken out of my fallopian tube where it had gotten stuck on its way to my uterus. An ectopic pregnancy or a tubal pregnancy is a different phenomenon than a miscarriage. So many interesting things can happen in a child’s very early life and I believe that God is control of all of them. God used our first baby, whom we affectionately call “Baby A,” and taught us a lesson that was hard for us to learn. While I will never know His entire purpose for allowing that situation in our family, I do know that I learned a great deal from it.

The physical pain I was in caused me to go to the doctor thinking I was having kidney stones. He asked me to take a pregnancy test, but since I had recently had bleeding, I assumed I was not pregnant, thinking I had just had a light period. The doctor reminded me that it could have been implantation bleeding, so he had me take a test. What an unlikely place to discover I was pregnant- in a doctor’s office by myself, without my husband. The doctor though, was obviously concerned. He congratulated me on the pregnancy, but then quickly shifted his facial expression and said, “However, something must be wrong for you to be in this much pain.” He directed me to make an ultrasound appointment, but I couldn’t get in until two days later. The ultrasound confirmed that I was indeed having an ectopic pregnancy, to which my husband confessed he had assumed. He had been researching what was possibly going on during the night prior to this appointment. I was confused and upset and frantically asked if the baby could be “moved” to my uterus where it could grow safely. The doctor at the hospital where I had the ultrasound (not my doctor’s office- I had to go to a different hospital where they could get me in sooner for an ultrasound) just kept saying to me, “No, it’s not a viable pregnancy.” So, I was then sent to the ER back at the hospital where my OB/GYN worked. But, my doctor wasn’t available, and another OB/GYN was the one who was going to be doing my surgery. This was the first time I met her. I loved her instantly and thereafter saw her for all of my appointments (when we still lived in Chicago). She explained to me that my body was trying really hard to battle between saving my life and saving the baby’s life. My body was trying to flush the baby out of my tube to be “delivered” in a natural miscarriage, because my body knew it was not a viable pregnancy. But, my body also knew a baby shouldn’t be coming out that way and was forming blood clots at the end of my tube to push the baby back into the uterus. This clotting was slowly filling my abdomen with blood and I was told that had I waited even another day to have this surgery, things would have gotten very serious, if not potentially fatal, for me.

The pain from the recovery of my surgery was worse than anything I had experienced thus far and since in my life. It was worse than childbirth and I pray I never have to do that again. A few months after the surgery, we discovered we were pregnant again. We had not been “trying”- in fact- I had not even had a cycle. This reiterated to us that God is in control of our family, not us. I’m so glad he is because he can sure do a better job of controlling things than we can! This second pregnancy is what forced me to really deal with and grieve the loss of Baby A. I remember week 9 being really hard for me, as I was told Baby A was 8-9 weeks along before getting stuck in my tube because it was growing so big. The doctor had me imagine a pea getting stuck in a straw and growing and growing and bulging. It was not getting the nutrients it needed because there was no placenta, it was just cells that kept dividing. This is why the baby could not live. Week 9 of my pregnancy with Burkley, I was so anxious and sad that Baby A had not made it this far. I remember getting an email (I had signed up for those weekly development emails) saying that my baby now had fingernails. “Oh,” I thought, “Baby A never had fingernails!”

Eventually, I worked through my pain and learned to bond with my next baby, promising myself I would never forget Baby A, and that I did not have to have guilt for loving my next baby. It’s so interesting to me the range of emotions we go through when dealing with a loss. Baby A will always be a “part” of our family and each year we do something to remember. Last year, I made a bracelet to match the one I have for Burkley. This year, we are planning a trip to the pumpkin patch on October 15, so we will get a little something there in remembrance of our first baby whom we never got to meet.

If someone you know has had an ectopic pregnancy or a miscarriage, it can be hard to know what to say or to know what they are going through. Even if you have gone through it yourself, we all process things differently, so that can make it difficult. One of the things that I felt was the most helpful was when friends or family would not ignore it. It was very frustrating and hurtful to me when people pretended nothing had happened or refused to talk about it by changing the subject or not asking me anything about it. It was a real event, a real baby, and a real loss for us. It did happen and I’m open to dealing with it as reality. It was also not helpful for people to talk about me having other babies, as if Baby A would be replaced one day. In fact, that only made things worse. One of the best things people did for me was tell me their own stories. When I had this experience, suddenly many people started to tell me about their miscarriages or infant losses. It was encouraging to see them on the other side of such an experience and gave me my light at the end of the tunnel. While I think this is sage advice for anyone in any experience, I feel like it especially applies here: When you don’t know what to say, just be honest. Share your story, cry with the person, talk about the experience, ask questions. It often helps for us on this side of things to talk through things as well.

Life goes on, but we can always remember. 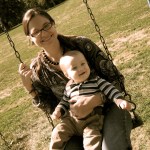 Adrienne is a stay at home mama to her son Burkley and blogs about her parenting experiences at Mommying My Way. Her hobbies include crafting, sewing, cleaning, and spending time with her family and friends. You can also find her on Facebook.