Over 10 years ago I had the amazing experience of living in a tiny village near the top of a mountain in Oaxaca, Mexico, for a month.

It was both a beautiful and very hard place.

One of the memories that has always stuck with me from there was watching the way the mothers carried their babies. They used big white bedsheets as a wrap to hold baby close to them. In the rare times baby wasn’t in the wrap with mum, they were still in the bed sheet that was then tied to the roof rafters in a sort of hammock that mom could walk by and give a little push to on a regular basis for a swing effect.

I was in awe at how natural and cool this looked; at the time I wondered if I would ever be able to do anything like that.

It was my first experience of babywearing.

When I had my daughter I was interested in all kinds of babycarriers, but initially the Moby Wrap most appealed to me due to this memory among other reasons, which included something unisex that the husband could also use and the fact that it was big enough for all body types.

I purchased my Moby from Evymama, a great store in Toronto (and online) that offers the chance to try the carrier in the store and holds ‘practice’ mornings every week where they will help you perfect your technique (I highly recommend finding a similar store if you’re able and in the market for a babycarrier!).

At the time I was 9 months pregnant and just about as fully confident as you can be before you’ve actually experienced becoming a parent. The Moby looked a little complicated but I knew I could master it – those women in Mexico had certainly made it look so easy!

Then I started practicing at home and it was kind of a disaster – with pregnancy hormones running high I have to admit I was pretty frustrated with the whole experience. I put it away for awhile and brought it back out when Bean showed up – I’d been watching instructional videos on YouTube until I was sure I had it down.

The first few times I put her in she seemed so content, and I was thrilled – I was wearing my baby! 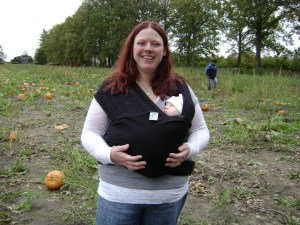 Then a few days later she started freaking whenever I put her in it. What the heck?? It made me really sad but I put the Moby away for awhile and tried my Peanut Shell sling instead, which worked well for awhile until she apparently decided she didn’t like that one either. This was definitely being a learning experience…

In truth I was getting discouraged. Being something of a perfectionist, I didn’t love that I couldn’t seem to get the hang of this whole babywearing thing and it was really important to me that Bean be close to me a lot of the time. I ended up just holding her in my arms a lot and considered giving up on the carriers altogether.

But when Bean was around a month old I saw a friend using the Moby with great success with her 1 month old – she had it wrapped in a different hold than the one I had been using.

Back to YouTube, learned the new hold, and we were off!

As Bean grew older and I grew more confident in my role of mama to her, I began realizing how versatile the wrap really was and it became as easy for me as I had hoped. The husband, on the other hand, didn’t love it. He tried willingly but it just wasn’t his thing.

But as Bean continued to grow and I learned more about options in babywearing that were available, we were able to find carriers and holds that worked for him too. From the wrap and sling we graduated to a Boba soft structured carrier as well as a hiking ‘back pack’ carrier. We did have a Snugli carrier for awhile that I wouldn’t use again for various reasons. Next on my list to try is a ring sling, one I haven’t really gotten the hang of yet but love the look of. I’d love to get a woven wrap which is great for labour & birth as well as babywearing. And if I ever learn to sew I’m totally making a mei tai!

The best lesson I learned from my experiences of wearing Bean is that babycarriers are most definitely one of those things where there is no one right fit. This was initially hard for someone like me to be OK with – for one because I don’t like not being able to master something I take on, and for another because baby carriers in general are not cheap – it can be hard to find you’ve invested in something and then not be able to get it to work!

Fortunately, there are stores that will allow you to try before you buy. I even know of several doulas who offer babywearing classes and the chance to try different carriers to get a feel for ones you might be interested in. You may be able to borrow one from a friend or relative, or search Kijiji, Craigslist or even garage sales for a used one (we’ve found 2 pretty great carriers at garage sales for rock bottom prices!).

I also found that different carriers worked better at different times for Bean and I – and a lot of it depends on mama’s mood – if you’re not comfortable or confident with the carrier, your little one is very likely to sense that and not be very happy in it either.

The greatest thing about finding a carrier that will work for you is that there is no lack of information out there. I bought my Boba on a stranger’s recommendation from Twitter and it’s been my favourite carrier so far. You can easily find reviews and ask questions of those who have experience with carriers you may be interested in. Do check out the safety guidelines – carriers are not regulated for safety, and research the benefits of wearing baby properly – it truly is great for mom, dad and baby!

Ultimately, don’t get discouraged. If something doesn’t work well the first time, wait until you’ve had the chance to chill a little and try it again. As hard as it may seem at first you truly will find your confidence in no time and people will be looking to you as one of the pros!

Disclaimer: I have not received any compensation from any of the products or stores mentioned above; I simply like or have information about them and want to share. 🙂

This post modified from the original posted at Becoming Crunchy: What’s Your Best Baby Carrier?

Kelly is mom to toddler girl ‘Bean’ and blogs at Becoming Crunchy about her family’s changing landscape from mainstream to granola. She likes to talk about the challenges and rewards of making the world a safer, healthier place for her daughter, along with what she’s learning about natural parenting, pregnancy and birth, healthy eating, and more. Find her on Facebook, Pinterest and Twitter. (And you can learn even more about Kelly in the Reader Spotlight here on the blog.