This post is part of a series of posts in honor of National Pregnancy and Infant Loss Remembrance Day. Today’s post comes from Nancy, AKA my mom. She has been a guest on the blog before. You can read more about Nancy below. (You can also read my version of  my story and my husband’s version.)

I will never forget the look on my daughter’s face when she told me she had miscarried her baby. Well, she didn’t really tell me, she didn’t have to. Her look said it all.

It was an October afternoon. Earlier in her pregnancy, she had some spotting and cramping and had had an ultrasound. The results showed everything was fine, not to worry. I had been very nervous while waiting for those results and when I did not hear from her at the expected time I became very alarmed. I can’t remember why now but for some reason she did not call right away and when she did I was so relieved.

A few weeks later, due to more spotting and cramping, another ultrasound was recommended. I was not too concerned this time since everything had been okay earlier so did not think too much about it. I had worked earlier in the day and had been home for a while. I was just starting to wonder why she had not called when I heard a noise at the door. At that moment, without even seeing her, I knew something was wrong. I half-walked, half-ran to the door and as I rounded the corner the door opened and her and her husband were there. She kind of stumbled in with a look I can’t really describe but it said it all, kind of a dazed, shocked, grief-stricken look. She did not have to say a word and I knew.

I just held her in my arms and we did not even speak. I could not speak. My heart was breaking – for my daughter, MY baby was hurting and in pain. My grandchild was no more. We went and sat at the kitchen table and I waited for her to tell me. I had many questions, but I knew that they would be answered in time. It did not really matter. All I could feel was pain. I knew I had to be strong for her, and I just wanted to take the pain from her. I grieved to see my daughter grieving and I grieved for my little grandchild. Inwardly I prayed. All I could pray at that time was, “Oh Lord, help us”. No other words would come to me.

In the days and weeks that followed there would be more trials to get through. It is something that never leaves you. I think about this little soul that is a part of me and what he/she would have been like. What color eyes? What kind of personality? This baby named Shannon that is in my heart. I call my grandchildren my hearts because they hold such a special place there. There is a place held in my heart for this grandchild until the day we meet in Heaven. 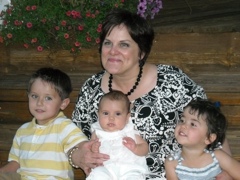 Nancy is a wife and mother of 2 adult children and 4 1/2 grandchildren, 3 on earth, 1 in heaven and 1 due in December.